My husband left this morning and as I write this I’m feeling okay. Ask me in a few days…or even in a few hours how I feel and that-of course could completely change. I am, right now more worried about our children. My eldest seems perfectly fine at the moment but last week he was one hot mess! He’d lament to me about how much he was going to miss me, while at school big wet tears falling uncontrollably from his eyes. I had the sinking suspicion that it was not me he was really going to miss but his father. Then one night…as we both put our boys to bed Michael, crying and we-unable to calm him down finally expressed what he’d been holding in. He said in the most heart wrenching fashion, “I have a big hole in my hear 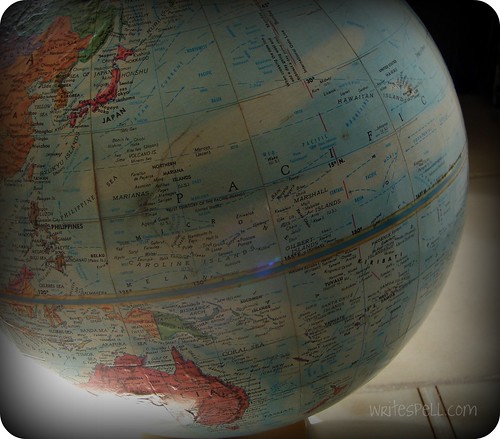 t.” My husband and I could only stare at each other over the top of his head as it rested on my shoulder. It was not what we expected to hear from our precocious six year old.

We gave him a great big hug and loved on him till he fell asleep. In the morning he seemed better and his crying at school eased. Today there were no tears when I dropped him off at school-but I think that’s because we were running late and there really was no time for tears.

I’m sure I didn’t help matters much when he saw my eyes well up with tears when we dropped his father off at the airport. This is the first long term separation our family is going to have in five years. Michael will eventually understand what we mean when we say Daddy’s got work to do for the Air Force.

Later in the day I got on Google Earth and showed him where his daddy was going and he seemed to get it. It was still a virtual representation of the space and distance between us and that is when I remembered this old globe (it’s from way back when the USSR was around) we discovered while moving in and cleaning up my brother in law’s old bedroom. I traced along the states from our location in Miami and then the great big Pacific to where he was going and then I showed Evan. I think Michael finally understood just how far away he’ll be and that we couldn’t drive there. As for Evan, he just asked when we were going to go pick up his daddy at the airport.

I couldn’t tell him when, so I just told him not today. He then asked if he was at our apartment and I told him no. I think he may be getting it that his Daddy is actually far, far, away.

It could be worse. We’ll get to talk and email and Skype, a lot of military families don’t have that luxury right now. I’ll take it!