Top
You are here: Home / Italy / Italy and the Squat Toilet

Just over a week ago on one of our first outings exploring our new Italian home I encountered the “squatty-potty”. It was at a local restaurant where we were having dinner. The very description of it sounded completely alien to my ears. “A toilet, that’s basically a whole in the ground.” I imagined a dirt floor and a hole. I was a little unnerved and so had to go and take a peek at the time even tough there was no real “need”.

I’d heard about horrible public restrooms in places like China, but never in Europe. The only thing I’d heard was that one had to pay to use them here-which I’ve as yet, not encountered. 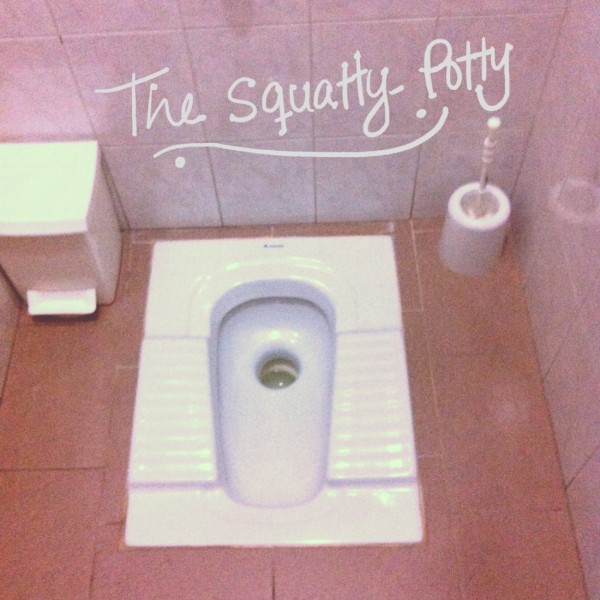 When the “squat-toilet” was being explained to me I was told that for “numero uno” you should face the back and for “numero due” you should face the front. When I got in there that made no sense to me. My advice, should I ever need to share the mysteries of your public toilets to the unaware would be to roll up your pants at the ankles if you’re wearing them and find any sort of moisture on the floor. Plant your feet firmly in the center, there are grooves there that will keep you from sliding. Pull down your pants and squat low. The squatting low is key to not getting dripped on. The first time I used one I easily went into my softball catcher’s squat and it worked great. So far I’ve been lucky in that all of the public restrooms I’ve encountered have been clean. Even the one on the train to Venice was not horrible. Though there was no soap, there was paper and luckily I always have hand sanitizer in my purse. I am a former Girl Scout after all Italia.

Since my first encounter with your squatty-potty, I find myself acting like a four year old when it comes to your toilets. I’m curious, and feel more than a little compelled to go in and have a look around. A novelty I’m sure will wear off eventually.

On my way to the toilette I secretly guess what sort of commode I’ll encounter. Either way you’ve usually decided that squatting is the best way to go about a public restroom since most of your more standard toilets don’t have a seat on them. Which leaves me no place to lay my delicate derriere should I so wish; and lets face it, I never really wished to in the States, so why would I here? A fact I’m very glad for now because my disdain for sitting in public has led me to develop excellent squatting capabilities which I began to hone during my freshman year at college. My dorm had a common bathroom on our floor, so I squatted a lot that year perfecting my “technique”.

Flushing is another matter I find rather confusing. All of your toilets seem to have a different flushing mechanism. It’s taken me a few moments sometimes to figure them out. Also, if there’s a basket in there I should put my paper in it. Shouldn’t I? I suppose doing so is way better than finding out too late a toilet doesn’t flush too well.

I’d also like to comment on the closeness of the male and female restrooms. I understand space is limited here. I get that. I also understand that most of your buildings were born before indoor plumbing. I will just need a little time to get used to having the men pee at such a close proximity. In one instance the men’s stall was right next to mine in the same room. I thankfully had only ventured in to take my son to use the facilities. I can’t tell you how quickly I high-tailed myself out of there. Call me a prude American if you wish Italia, but this girl like’s her privacy when toileting. Also, why do you leave your doors to your restrooms open? I don’t want people (I mean random men) to see me washing my hands, or adjusting my smeared mascara at the mirror. I’m not sure I’ll ever get used to that. But I’ll keep you posted should I begin to. Promise.

I was still very surprised to discover a toilet in the floor. I mean what if I had to sit? Like what if I couldn’t stand? What would I do?

I still haven’t answered that question, as none of the toilets I’ve visited aside from those on base have a disabled stall. Which led me to pay attention at other public places. For instance at the train station where I had to climb down and then back up a ton of stairs. I spied no elevators at any of the three train stations I’ve visited so far. Which gives me pause to wonder what does one do when one can not walk on their own here? I’m still investigating that, but if you could help me figure it out without having to ask a native I’d really appreciate it.

I never imagined I’d write about toilets…Prego Italia for the experience and opportunity to ponder these differences in culture.  I’m embracing them. I really am, though I can’t promise a bear hug in the toilette any time soon!