Today’s post is brought to you by YA Reads Blog Tours, and is an interview with R. Barri Flowers, author of the bestselling teen novels, COUNT DRACULA’S TEENAGE DAUGHTER, TEEN GHOST AT DEAD LAKE, and OUT FOR BLOOD, come the start of an exciting new young adult adventure series, Summer at Paradise Ranch (Paradise Ranch Series #1)

Can you tell us about your book, Summer at Paradise Ranch, in 15 words or less?

It is a YA romance, coming of age, and adventure novel in Maui, Hawaii

What was your favorite scene to write?

My favorite scene to write was when Lexi Montoya, the protagonist, first learned to hula dance. Though not a natural, she caught on quickly as part of her adventure on the island.

What was the hardest scene to edit out?

At the beginning of the novel when Lexi had to say goodbye to her boyfriend, Matt, and other friends in Seattle before embarking on her journey to Hawaai.

Do you have a favorite quote from the book?

“Good morning,” she said, adding, “or in Hawaiian, aloha kakahiaka.”

If Summer at Paradise Ranch were to be transformed into a movie, who would you cast to play the main characters?

That’s a fun question! Let me see… there are so many great actors, I will have to list a couple of choices for each character for readers to pick from as their choice when reading the novel.

Mitsuo, the cute Hawaiian she is gushing over: Jake Austin or Avan Jogia

What made you want to write more of a YA/adventure/contemporary book as opposed to your previous YA paranormal series?

As a part time resident of Hawaii, I was inspired by the diversity of the islands with its rich history. I felt that Maui, in particular, lent itself to a fun teen adventure novel, where my protagonist, Lexi, was out of her element and had to adapt while going through the typical teen drama and coming of age. This included learning to hula dance, ride a horse, and surf.

Did you find that transition to be at all difficult?

Actually, it was quite easy to go from a YA vampire series, such as Transylvanica High, to a non paranormal and more realistic teen tale. That said, I really enjoyed writing my YA paranormal novels, COUNT DRACULA’S TEENAGE DAUGHTER and OUT FOR BLOOD, and developing this world.

Will there be a sequel to Summer at Paradise Ranch?

Are you currently working on anything else?

Yes, I am working on the third book in the Transylvanica High series, titled, KULA’S REVENGE; as well as an adult murder mystery, MURDER ON KAANAPALI BEACH.

What is the best book you’ve read recently?

What is currently in your TBR pile?

There are several books I want to read when I have the time, including:

THE CURSED by Heather Graham

You can find Summer At Paradise Ranch at the following locations: 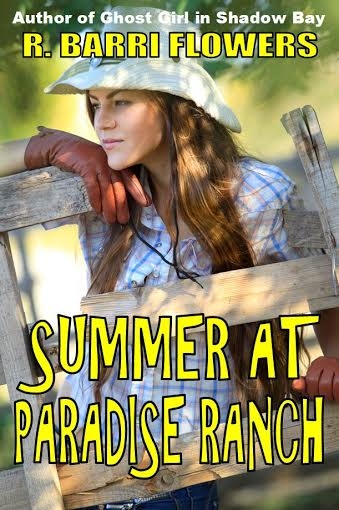