Top
You are here: Home / Books / Book Review: Stephen King’s “Under the Dome: A Novel” 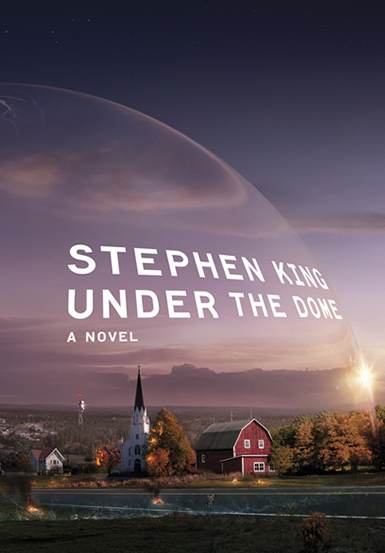 I read the last words of Stephen King’s Under the Dome: A Novel

this morning sometime after one. I was glad to be done with it-for a number of reasons-but mainly because my arms were sore from carrying it around. I was left-if possible-feeling simultaneously depressed and happy. Depressed because although this isn’t a tear jerker, it is pretty darn grim and happy because not everyone in this story’s massive cast had died.

According to King, he first began this tale in 1976-but put it aside after writing 75 pages. “The Dome” was left stewing in the back of his mind until 2007 when he began to write it once more; 480 days later he finished it-an amazing feat considering this story is 1,100 pages long. But Mr. King is known for being a speed demon when it comes to writing-perhaps that’s his secret to writing these wonderful masterpieces of grotesque proportions. I’m more apt to think that even he can’t stand the gore for very long which is why he has to glue himself to the story until he can peel it off his skin-like I used to do with Elmers glue when I was a kid. I’m still trying to figure out how he managed to keep his enormous cast in check-but King is a master at what he does and in Under the Dome

, Stephen King once again created an amazing tale about the good, the bad, the beautiful and the ugly aspects of human nature in vivid detail.

The story begins on a day like today-and ends about a week later after what can only be described as an event apocalyptic in nature.  The New York Times took issue with a bit of King’s writing-I did not. I thought this tale was a good one. It won’t end up on my “favourite” list-in all honesty-I don’t think a Stephen King

story ever will-mainly having to do with things like brains “drying” on walls. It is in other words a story that I won’t read again and again; because I just don’t have the stomach for it. This book did keep me up at night-playing possible conversations between the characters as I lay awake and wondering about what could happen next. In my eyes if a novelist can make me do that then the book receives high marks and this one does. I can appreciate and hope to one day obtain the level of exquisite detail for which King has the ability to paint a picture for his readers-whose dialogue is wonderfully written and for whom this story will not quickly be forgotten.

*I was not compensated in any way for this review.